Our HydroStation and ROC the Riverway Initiative

With funding and guidance from the City of Rochester and ROC the Riverway, Hunt Engineering is close to completing the study of the Hydro Station’s structural integrity.  Drones were used to glimpse inside. Repellers jumped off the edge to look at the outside. A boat was launched to look underneath.

Sensors were placed to measure vibration on top. Data is being compiled, and will be presented to the newly formed High Falls Overlook Advisory Committee that will meet before the end of the year. Community members on the Advisory Committee will be helping to inform next steps to take in the development of the building.

Please take a moment to read this update and support our Annual Campaign.  Every dollar counts towards helping Greentopia continue its exciting work and brings us closer to a more vibrant, sustainable and equitable community.

The grass is greener on the Greentopia side of the street

While it was nice being in the building on the corner of Platt Street and Brown’s Race, the sale of the building that housed Greentopia for the last several years resulted in our move to new digs across the way at 74 Brown’s Race.

“If you need us, we’re across the street,” said Greentopia Co-Founder Michael A. Philipson.  The move happened May 1 and the new quarters are both larger and a little more accessible, as the space is all on one level now – no more steps and ramps! One added bonus is the new office provides additional income for our initiatives because it includes two spaces to rent out, one of which is occupied. Another bonus is our new boardroom and balcony look out over the Genesee River gorge. And that’s the reason Greentopia moved to the High Falls area in the first place.

Stop by if you get a chance.  Just remember, we’re on the river side of the road now.

It’s going to be an exciting year for Greentopia, as we move further into creating some of the physical projects that have been a goal since our inception. Here’s a look at what’s coming:

And here’s something you won’t see in 2016 – Greentopia festivals, like the ones offered free for four years. The original festival and the film festival that grew out of it both took lots of time, effort and money, but they were worth it to bring awareness to Rochester’s biggest hidden asset — High Falls. Our founders and board of directors have decided that the time has come to devote those resources to making the GardenAerial at High Falls a reality. The festivals aren’t truly gone, though. Many of their elements (free and low-cost events) will be spread throughout the year, but in a more sustainable way that supports the goal of attaining a vibrant, publicly-accessible realm around the falls. To become a part of that, consider becoming a member.

If you missed us at the Futures Summit at Monroe Community College, you missed:

This film gives a 5-minute overview of the entire GardenAerial project. It features stunning new footage of the High Falls and Gorge and testimonials by some of our citiy’s most influential leaders in government, education, innovation and business. Please take a minute (well, 5 minutes, actually) and feel free to share with your networks. We really want to get the word out about this transformational project and we think this film does a great job doing that.

Once you’ve seen the film, if you are inspired by the message and if you ‘believe in the GardenAerial’, please consider giving a donation so we can continue the work of Greentopia.

Many thanks to Don Caspar at Epic 10 Films and also to J.R. Kraus and crew at 57th Street Productions and WXXI for providing a stunning clip of the falls seen from the base of the gorge! We’d also like to thank: Maggie Brooks, Lovely Warren, Bob Duffy, Jim Senall, Heidi Zimmer-Meyer, Ram Shrivastava, Kayla Jenkins and Lisa Roy Baron for appearing in the film.

Again, enjoy the film, share it with your friends and colleagues. We’d also love to hear your feedback!

We are so grateful to Don Caspar of Epic 10 Films, J.R. Kraus of 57th Street Productions and the entire cast and crew that made our NEW GardenAerial promotional film possible. We’ll be mounting a couple of trailers here in the coming weeks and then premiering the short film at our Greentopia | FUTURES SUMMIT, Cities of the Future at MCC on October 21st. Our cast includes: Bob Duffy, Maggie Brooks, Lovely Warren, Heidi Zimmer-Meyer, Jim Senall, Norm Silverstein, Ram Shrivastava, Lisa Roy Baron, people who work, live and play in High Falls, and our Co-Founders, Lewis Stess and Michael Philipson.

We also captured some VERY sexy drone footage and created a musical score composed especially for the film. The big star is, of course, our magnificent gorge and falls! Enjoy this preview and watch for the full film release on October 21st!

Our new GardenAerial promo film, directed and produced by Don Caspar of Epic10 Films, is in final stages of production and will be premiered very soon. It will be both informative and, we hope, inspirational.

And, it will be beautiful! Narrated by Lisa Baron, Founding Board Chair of Greentopia. 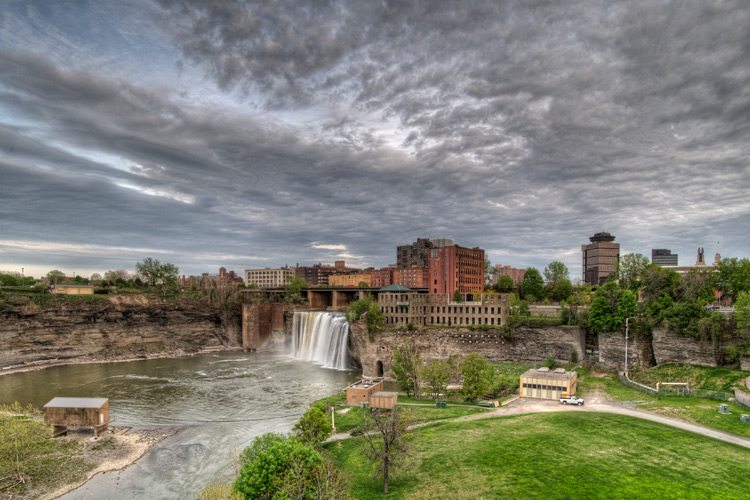 Tomorrow, we will have our official photographer, Walter Colley, headed up in helicopter to pass over the gorge at High Falls to snap some fantastic pictures of the entire area. We would like to extend an invitation to any and all people to come take a break and be on the Pont de Rennes Bridge at 11:15am to be involved with the fly-over shoot.

If you’re in the area and want to be a part of a great photo-op, please feel free to come check out our first truly “Aerial” adventure!