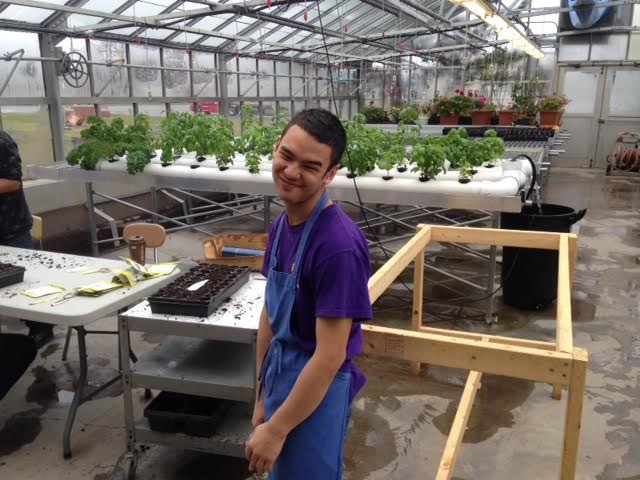 The program has partnered with Edison’s Buildings & Grounds Careers program on a pilot project in three ways:

“One of the major hurdles for people with a disability is getting that first job,” said Lewis Stess, co-founder of Greentopia.  So far, most graduates of the Green Visions programs have gone on to jobs, but not within the landscaping field, Stess said. But the students from Edison may be an even better fit for this kind of landscaping work.  “They could become great gardeners, great landscapers, great bouquet-makers,” he said.

Meanwhile, Green Visions has just been recognized by the Rochester region chapter of the Sierra Club with its annual Environmental Leadership Award. Morgan Barry and Tiani Jennings, managers of Green Visions, accepted the award April 21.

This latest accolade and the new partnership with Edison come at a time when Green Visions is ramping up its ability to serve commercial accounts. Last year Green Visions provided 15 bouquets a week to Wegmans’ East Avenue store. This year the order has been upped to 100 bouquets shared among three Wegmans stores.

“We’re going to be the only local suppliers of cut flowers,” Stess said. “And we supply those flowers from vacant, unused lots.”

Youngsters 18 to 22 who come from the Northwest part of the city will still fill most of the internships Green Visions provides. In a neighborhood like JOSANA, paid internships can be a rare opportunity leading to sustained employment. Besides providing a job reference and experience, the Green Visions program also provides certification in job and environmental safety practices — important credentials for landing another job.

Such training may be even more valuable for Edison’s students. Morgan Barry, program director for Green Visions, noted that the unemployment rate for 20- to 24-year-olds with disabilities is 70 percent nationally, which is double the rate for their non-disabled peers.

Chris McCoy, the Buildings and Grounds Careers teacher at Edison said, “One of the greatest indicators of post-secondary employment for individuals with disabilities is whether or not a student works or volunteers during high school. Community partners such as Green Visions provide a real-life work setting as well as the types of job training skills that are the difference between employment and sitting at home.”